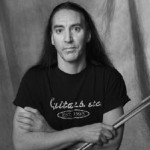 Rich Carlson is an accomplished, self-taught drummer who began playing when he was 14 years old, giving him over thirty five years of drumming experience. His drum technique is influenced by John Bonham, Tommy Aldridge and Denny Carmassi just to name a few. At the young age of 15 Rich began playing in bands in the San Francisco Bay Area. Rich played in an array of cover bands, playing 5 night a week to improve his skills and by the age of 20 was a proficient drummer playing the Bay Area club scene. His bands have included The Toys, Hari Kari, G Force, Autobahn, Horse, Bullet In The Chamber and Badd Boyz – a band that included Paul Shortino ( Rough Cutt, Quiet Riot and currently Raiding The Rock Vault, currently one of Las Vegas premier attractions.)

Some highlights of Rich’s musical career include auditioning for Ozzy Osbourne and getting a second call back and also opening up for many big name acts including Pat Benatar, Blue Oyster Cult, Great White and most recently Bret Michaels of Poison. Rich Carlson has been teaching drum lessons since 1993.
Most students are typically able to play a song within two – four months of beginning lessons. Rich’s approach to teaching is un-intimidating and his objective is for each student to have fun while learning and improving their skills. Rich has been teaching with specialties in the following styles:

FacebookTwitterEmail
Page load link
We use cookies to ensure that we give you the best experience on our website. If you continue to use this site we will assume that you are happy with it.Ok
Go to Top