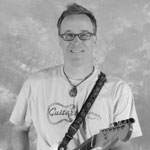 Graduated with a B.A., Music 2004 from Minnesota State, Mankato. Originally from Mpls, has now been teaching in Northern Colorado for the past 11 years and arranging performances for students at local venues such as Oskar Blues. In addition, his students have been winners of “Battle of the Bands” contests and performed in Denver and Winter Park. Two Colorado bands Jerry played guitar in and recorded with are “Blues is Blood” and “Musketeer Gripweed.” Most recently, was lead guitarist in Front Range band “Johnny and the Mongrels.”